AI and the Phantom Worker: The Story That They Never Told You

The popular idea that Artificial Intelligence (AI) and robotization leads to unemployment is simply not supported by data. Data for the last 10-20 years shows a different trend altogether – human development, skilling, and education are the key determinants of low unemployment rates. Moreover, the anecdotal evidence increasingly suggests that new technology creates, rather than destroys, jobs.

Over the last 5 years, there has been endless talk about how machines and AI will continue to kill jobs thus increasing unemployment. Prominent newspapers often publish articles to this effect. One particular survey from 2013 by Benedikt Frey & Michael Osborne stated that “47% of workers in America had jobs at high risk of potential automation. In particular, they warned that most workers in transport and logistics (such as taxi and delivery drivers) and office support (such as receptionists and security guards) “are likely to be substituted by computer capital.” (Source: The Economist, June 23, 2016).

The most famous alarm bell ringer on AI is Martin Ford, a futurist, and an entrepreneur. In his book ‘Rise of the Robots: Technology and the Threat of a Jobless Future’ (2015), Ford paints a very grim picture of the situation, with statements like “what if robots can do anything humans can do? Would there then be long-term technological unemployment?” (Source: The Economist, October 20, 2010) and “middle-class jobs will vanish, economic mobility will cease and a wealthy plutocracy could ‘shut itself away in gated communities or in elite cities, perhaps guarded by autonomous military robots and drones’. The unemployed masses will subsist on a universal basic income.” (Source: The Economist, June 27, 2019).

Interestingly, anecdotes and alarmist quotes aside, there is very little data to substantiate these claims. In fact, according to Maximiliano Dvorkin, the number of non-routine cognitive jobs has increased steeply in the last 30 years, whereas the number of routine manual jobs remain more or less flat (source: The Federal Bank of St. Louis, January 4, 2016). Critics of the AI doomsday prophets often point to Amazon as an example of automation leading to creation, rather than destruction, of jobs. The Seattle Times had reported “The world’s largest e-commerce retailer said it has 45,000 robots in some 20 fulfilment centers. But most importantly, Amazon also reported a 12 months 46 percent increase in the number of staff.” (Source: The Seattle Times, December 29, 2016).

The Amazon experience is not an isolated example. In the world of accountancy, despite significant advancements in software (both in terms of specialized accounting software and in terms of widespread availability of spreadsheets), the number of Chartered Accountants has risen in most countries. According to the Association of International Certified Professional Accountants (AICPA), their enrolment figures swelled on an average per annum by 1.4% from 1995-96 to 2015-16. Furthermore, in the home of accounting software, the US, the number of new hires by CPA (Certified Professional Accountants) firms rose by about and average of  3% per annum from 1996 to 2016 (source: AICPA Demand and Supply report, 2017). Another more prosaic example of automation being accompanied by rising, rather than falling, employment is the Bombay Stock Exchange (BSE). The total number of employees of the BSE rose by about 1% on an average per annum between 2013-14 and 2019-20.

If the evidence that automation leads to job losses is ambiguous at best, and non-existent at worst, then:

1) What explains the rising concern regarding unemployment in both the developing and developed world? And,

2) What can be done to improve and enhance the job creation engines which drive economies across the world?

Looking at the time-series data for four major Advanced Economies (AE) of the world (Exhibit 1), unemployment as a % of the total workforce (hereon unemployment rate) has declined, especially in the last 4-5 years. In fact, barring the fallout of the Global Financial Crisis, unemployment rate has been stable over the last 20 years in these economies. 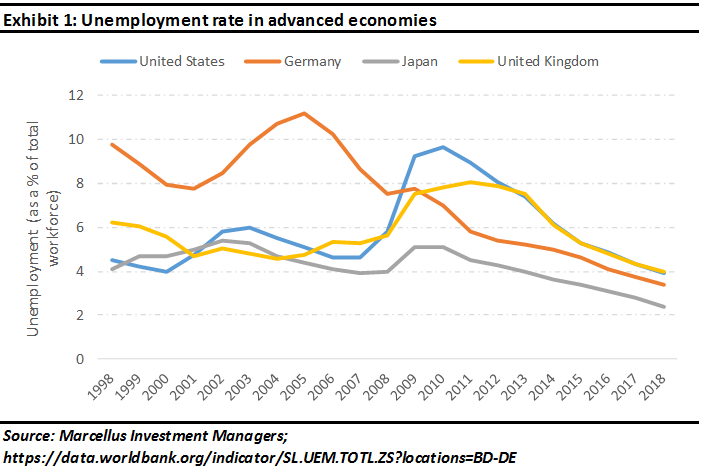 If we look at the prominent Emerging Markets, barring Brazil, there does not seem to be any structural shift in the unemployment rate either upwards or downwards over the last 20 years. 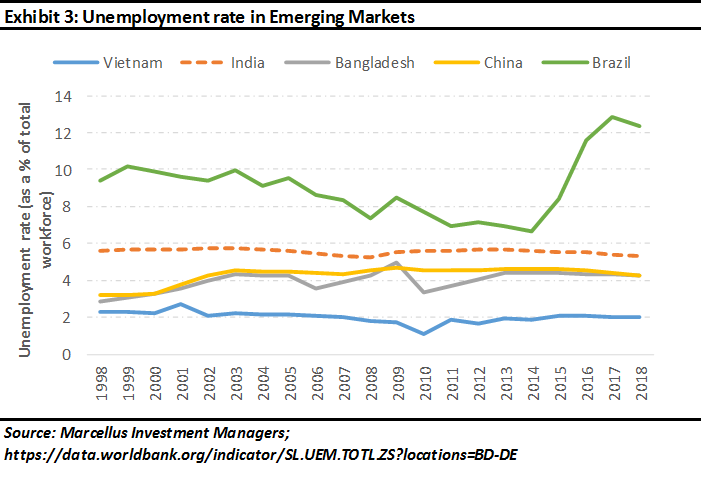 To understand why there is so much talk on unemployment, we need to look at skilling and education, more precisely the links between skilful education, human development, and unemployment. To this effect we have analysed PISA scores (The OECD Programme for International Student Assessment examines what students, aged 15, know in reading, mathematics, and science (source: OECD website), HDI (the Human Development Index data gathered by the United Nations Development Programme), and unemployment rates. The PISA data and HDI data and the corresponding unemployment data has been taken for the year 2018. A relatively new index, the Global Index of Economic Mentality (GIEM) (source: Atlas Network, 2020) developed by Carlos Newland, Pal Czegledi, and Brad Lips measures economic freedom with respect to minimal government intervention and maximum private initiative, personal responsibility, and free competition.

The results of our analysis, shown in Exhibit 4, highlight three key results:

Delving deeper into the EM’s and the developing countries, we look at HDI and unemployment rates in Bangladesh, Vietnam, and India. Interestingly, all three countries have shown improvement in HDI over the last 20 years and at broadly the same rate. 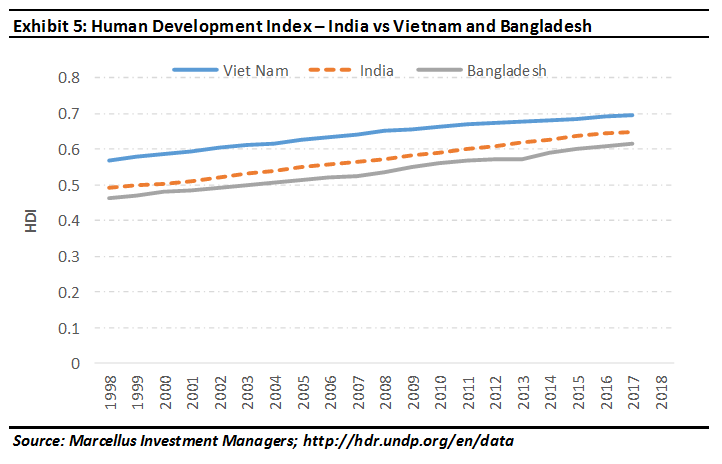 This is true for AE’s and developed countries as well. We saw in Exhibits 1 & 2 that unemployment in the developed countries has been stable for the past two decades. Looking at the data for US, Germany, and Japan we find that not only have their unemployment rates fallen (10-year CAGR of -1.45%, -10.08%, -5.21% respectively), this has been backed up by steady improvement in HDI scores (10-year CAGR of 0.40%, 0.97%, 0.78% respectively). 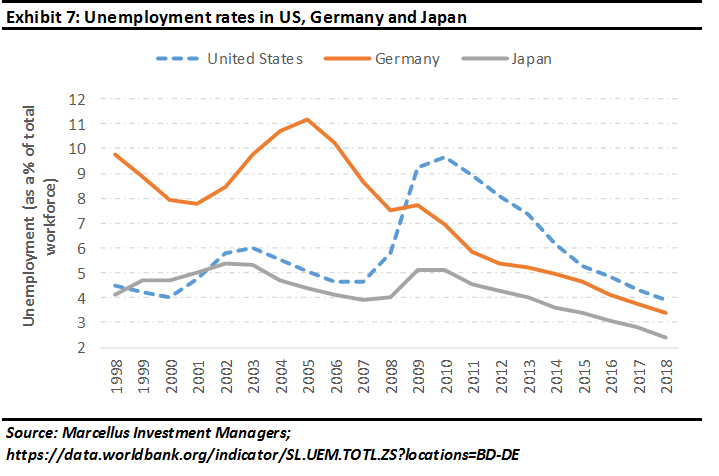 Logically, this makes sense. According to a widely quoted report from James Bessen and his colleagues in a Brookings Institute report: “rising automation represents an increase in a challenge that society already faces, not a challenge of an entirely new sort” and that “evidence suggests that there is a role for governments to facilitate these transitions following automation episodes” (source: Brookings, January 2020). In that sense, the role of the government is no different to what it was in the preceding century.

In fact, the rise of automation in the context of the gig economy seems to be fostering employment, rather than unemployment, in EM’s like India, Vietnam and Bangladesh. For example, the rise of cab rental services like Uber and Ola may have put some traditional taxi drivers out of business but has substantially increased the number of contractual drivers working for these services. There were around 63,000 black & yellow taxicabs running on the streets of Mumbai approximately 20 years ago. In 2018, that number had fallen to 18,000. However, the number of Uber and Ola cabs in 2018 was around 75,000, raising the total number of cabs on the streets to 93,000, implying an average annual growth rate of ~2% (source: Indiatimes.com, April 1, 2019).

Much like the point we made in our preceding piece about de-globalization being fake news (click here for our preceding piece), it appears that the fears created around AI and mechanization are of a similar sort. As Joel Mokyr, and economic historian at the Northwestern University put it “Imagine trying to tell someone a century ago that her great-grandchildren would be video-game designers or cybersecurity specialists. These are jobs that nobody in the past would have predicted” (source: The Centre for Innovation Studies, May 29, 2017). New technologies and advancements will bring new types of employment opportunities – the key is to be able and skilled enough to grab those opportunities.

Mark Mobius is the Founder of Mobius Capital Partners LLP. Saurabh Mukherjea and Nandita Rajhansa are part of the Investments team at Marcellus Investment Managers.

How Portfolio Management Services in India Rediscovered its…